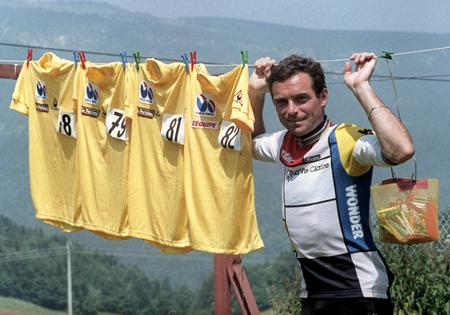 Our competitive weekend training rides which were previously good natured, yet competitive, evolved into something more.  The exclamation of “I’ve been here for 2 minutes, I’m in Yellow”, set forth a chain of reactions that would forever change our group ride. The attacks begin.
The first “Yellow Jersey” wearer was a childhood friend of mine, really good athlete and a fierce competitor.  There was no doubt that on that day, he did put some time into us on the climb.  Up until that point, yes, as a group we did push and compete against each other.  But prior to that statement, there really wasn’t much on the line if you didn’t finish with the group, maybe hurt pride or something like that but definitely not a virtual leaders jersey.  At first I didn’t know what to make of his proclamation, it was not totally out of line because there was always some sort of trash talking during our sporting contests.  The difference was that none of us knew who was really the best cyclist, cycling was unchartered territory.  I took it as a challenge to get that jersey, not sure how the other guys took it but at that point in time, a hierarchy was established; there was my friend in yellow, then the rest of us.
We all laughed about what he said but you could see the pride in his face having beaten us, and you could also see the look of concern on the faces of the others.  This was absolutely going to be an interesting time together. After we returned from the ride, we kinda had a discussion on what it meant to be in Yellow.  We set some basic ground rules:
An honor system, you could not lie about the time you had on others
No running red lights to gain time
While in yellow, you had to defend it the following week or you forfeited it
There would be a final sprint to determine a stage winner (usually decided on the spot when and where it would take place)
No time bonuses for sprint placings, just bragging rights
There was no actual jersey, no ceremony, just a beat down on the road and one guy came out on top. That was pretty much it.
During the week leading up to our next weekend ride when my friend would defend the jersey for the first time, I made sure I rode some miles during the week.  I was always a decent climber, my other friends were usually faster sprinters.  Never did I focus on sprint training, I knew the ability to climb is what would get me the Yellow Jersey.  Our rides up until that point were fairly consistent; we determined the route before hand and it always included a couple of climbs. We’d usually just ride steady on the flats then hit the hill hard. Back then, we wouldn’t set out on the rides before 11am. As a group, we were all pretty close in ability in the climbing department, the current leaders jersey wearer was the craziest on the descents and generally the fastest sprinter among us.
Saturday rolls around, we meet in San Jose, Ca. to do battle. As everyone arrives, we are greeting each other as usual but there is now a little tension in the air.  The ride is scheduled to go around Uvas Reservoir, a big loop with lots of false flats and rollers.  To get there, we had to go up a short 1 mile climb with a 6% grade. We knew this was going to be a different ride today. As we rolled out and headed toward the climb, we laughed and got caught up on things since we last met but as we got closer to the climb, guys started taking on drinks and food and the conversations got shorter and shorter……
We hit the climb and the attacks began, woah….we rode hard before but there was some serious aggression going on here now.  We all follow and settle in, the climb is short so we are all trying to hang with the front guy.  As we descended the hill, there was about a 5-10 second gap between us.  The front guy stops at a 3 way stop sign and began counting! WTF? Lol..he was claiming Yellow by 10 seconds…oh so it’s like that huh?  Everyone knew the time gaps, the rest of the way around the loop there were attacks at every opportunity, riders closer on time were helping each other chase down the jersey leader and so on.  It was crazy fun, very hard, but made our rides memorable.  We had to institute a rule that you could not count time at an arbitrary stopping point, so for every ride we mapped out stopping points along the route.  This new rule now meant your attacks and counter attacks had to be more strategic.
The friends who would come out with us on these rides thought we were crazy, we were just too damn competitive for them.  We descended like mad men, going into blind corners and over taking cars all in the name of gaining time. They quit coming out on the rides and would tell mutual friends who thought about getting into cycling and joining us, “don’t go out there with those guys, they’re nuts, that take that s**t way too serious!”
We had this competition amongst us for a couple of years, the jersey changed hands amongst a few of us multiple times but there was one rider who never wore Yellow until one day….
Next in our Dub-Wise Yellow Jersey Series:The Yellow Jersey(pt.3)-The Unlikely Wearer Of Yellow.