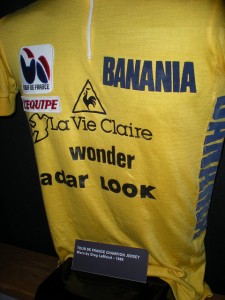 Here is part 1 of a 3 part series recounting how my close group of friends and I got into cycling, rode together and how we went from casual rides to a competition to see who could get, retain, and regain The Yellow Jersey.

My initiation into riding bikes came at a very early age, but I viewed bikes as more of a means of transportation to get to the store so that I could buy candy.  Not until my mid-twenties did I get into riding for exercise.  I split time between working out in the gym with my brother doing bodybuilding type workouts, I had a touring bike I would ride to work during the week.  This was about 1985 when I was living in Palo Alto, California. Spending more time on the bike meant more time at bike shops. Frequenting the bike shops is where I found this fascination with bicycle racing and specifically the Tour De France. 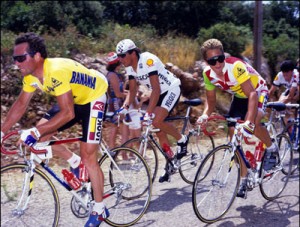 I would marvel at the race bikes and read Winning Magazine, Bicycling magazine.  I had heard of the Tour before but  when I saw the pictures it was amazing….I would sit in shops for hours reading all of the cycling publications.  The bike shop I frequented the most was Palo Alto Bikes, they had the most beautiful Italian bikes (Ciocc) with full Campy Record…get this, $1250 for a top-end bike! That was a lot of money back then for a bike.  I wanted one but couldn’t afford it. After searching the local papers, I found one at a bike shop on the mid- peninsula, a Ciocc for $500! The salesmen assured me that it was indeed equipped with full Campy (little did I know that bicycle grouppos are assigned different quality levels depending on the price, this one had the lowest level grouppo, but I didn’t care, it was full Campy!).  I Test rode it (it was a 56cm, in retrospect it was too small but what did I know?). The guy raised the seat and said I was good to go. The steering was so fast, twitchy. I was used to touring bike geometry but for me, the fast steering just meant it was a fast bike.  Compared to my touring bike, the wheelbase was so short that when looking down at the front wheel, it appeared like the wheel was right underneath me. 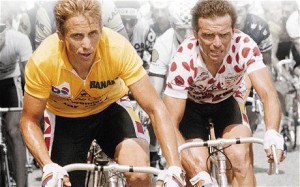 Fast forward  a couple of months. A good friend of mine who I’ve known since childhood and played team sports and rode skateboards with, told me he had a mountain bike and that I should get one.  He stopped by and I told him to ride my new road bike, he rode it once and swore he was selling his MTB, and he did.  From that day on, we would ride on the weekends and eventually we got friends and family into riding. A small group of us got pretty serious about riding every weekend. We’d watch the Tour on T.V.  We really got hooked on the sport after seeing Greg LeMond win the Tour in ’86.  We watch the Coors Classic ITT in San Francisco the year he won the Tour, we saw Hampsten, LeMond, Hinault, Guido Bontempi…..all of our Tour idols.

We’d ride more during the week so that we’d be fit for the weekend ride.  Our rides consisted of cruising the flats and going hard on the hills.  We were emulating the heroes we saw in the Tour, hearing that crappy John Tesh music (in our heads ) that CBS used at the time to create dramatic effect during their broadcasts of the race.  I guess they had to do that to sell bike racing to the U.S audience.  We had our favorite riders, mine were Gianni Bugno, Sean Kelly, Tony Rominger.  Strangely I was never a LeMond fan, but over the years I have come to respect his talent and achievements. 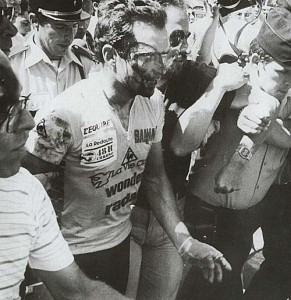 After every ride, we’d hang out drinking beer and hour after hour replay the VHS videos we recorded from the T.V of the Tour and Paris-Roubaix.  We were becoming more knowledgeable about the sport, fitter, acquired better equipment and clothes…things were getting serious. We had a who’s who of friends and family that would come and go on our weekend rides.  Many of them just couldn’t handle the pain and discipline it took but four of us stuck with it.

Initially, I thought it was just cool to have a nice looking bike and colorful clothes, I never realized the level of pain I’d have to put my body through.  I played football and baseball but nothing compared to the hurt cycling inflicted upon me. I was definitely being tested on these rides. Then one day, my friend took me up a 9mi climb.  It took me 1hr. 30 min, I could barely sit down my legs were so wobbly.  When he said..”you are the first person I have taken up here that didn’t stop or turn around..”, I thought to myself..”maybe I can be good at this”.  All the pain going up was all but forgotten when I descended, man what a rush that was. 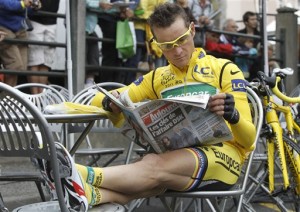 Something was changing within our group, the slower guys were getting faster and the pace was getting faster too.  Guys that were normally not good climbers were climbing better.  Apparently, these guys were riding more during the week and were showing up for the Saturday ride READY. The competitiveness in all of us began to take over, we’d push each other harder than before. The signature moment in the evolution of our group ride was when my friend being the first one to the top of the climb said as we were coming in one by one…”I’ve been here for 2 minutes, I’m in Yellow“. After an awkward silence, one of my friend replied…”oh, ok…let’s see if you can keep it all the way back home”…woah, s**t just got real.