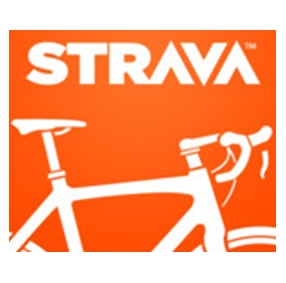 When I first started out riding road bikes, it was a time when friction shifting, toe clips, and steel frame bikes were the norm.  The one beautiful aspect of riding was the innate connection you felt with the bike using friction shifting (compared to the shifting options now i.e. index-shifting, electronic).  At that time, you were required to shift then slightly finesse the shifter in order to center the chain on the rear cogs so that it didn’t rattle. You also had to know which gears were optimum for gradients and sprints.  There was no shifting mid-sprint without sitting down thus losing momentum, you had to know the optimum gears for any particular tactical situation, it was a learning curve that was only mastered with extensive riding experience.

I have the new index shifting now, it is nice but there is a disconnection with the bike as I can now shift without even thinking about it, now I perform shifts almost unconsciously. I embrace the new technology; it has changed my riding experience for the better but also sometimes for the worse. Of course, over the years I gradually upgraded equipment and embraced the new cycling technology like high-profile rims, carbon frames, carbon-sole shoes etc.

I never really cared about average speed, max speed or cadence; I was concerned only with my ride distances. I think the era of friction shifting and basic Cyclocomputers represented a more stress free time of riding.  There were no cell phones to answer while out riding, no text messages received while climbing at your threshold.  Riding your bike was an activity that allowed you to disconnect away from the daily stresses of work, family etc. for a few hours.

That was a different time in cycling culture, and I think it has given me a different perspective on the new technologies like GPS enable devices and it’s integration into the cycling culture in the era of social networking; specifically using GPS devices with Strava. 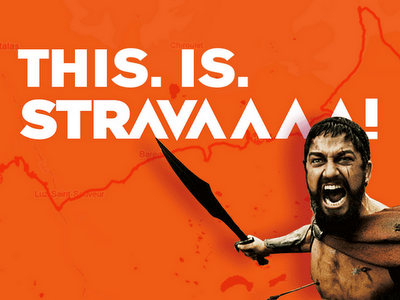 If you are not familiar with Strava, it’s an web-baased application (or app) that uses GPS information collected from a smartphone or Garmin device to track your numbers. What numbers? Your cycling or running speed, distance, elevation gained and progress on a real map.

I joined Strava a couple of years ago at the suggestion of a friend.  I checked out some of the GPS devices, read up on the technology, but at the time I couldn’t justify getting a new device to track my riding distances. A couple of years later, a friend gave me his broken Garmin device and I sent it in to Garmin for a replacement unit. A week later I received my first GPS device (a Garmin 500) along with a Heart Rate (HR) monitor and strap.

I wasn’t really sure how I was going to use this device; to me it was more of an upgrade to my existing Cyclocomputer with some interesting interactive features. After my first ride, I uploaded my ride file to the Strava site. I liked seeing HR data for my ride duration and during particularly hard efforts.  I’ve never used a HR monitor before, but now find it useful to train targeting particular HR “zones”.  One surprising revelation was that during one ride, I purposely didn’t want to see what my HR was so I only monitored my speed. I wanted to see if all of those intense training efforts that I used to perform by “feel” would be close to the Strava training zones. They were almost identical. 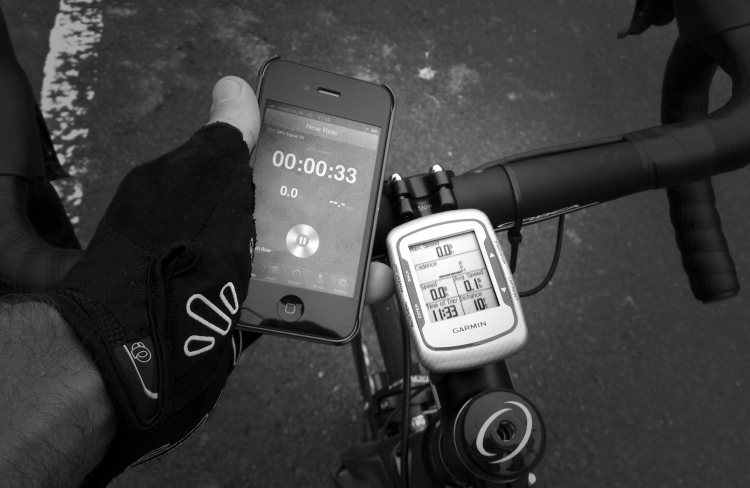 From the thousands of users on Strava who have uploaded their ride data to the site, there are thousands of “sections” that have been created; it’s these sections that the users try to set a best established time.  The best times are on a Leaderboard, there can be hundreds or thousands of times posted. Some sections are very long, and some are short.

It was interesting to see my speed on certain sections of my ride and what was really cool, was seeing what the fastest times were on some of the more challenging (and less-challenging) sections. As a fairly competitive person and having raced for almost two decades, it peaked my interest to see if I could beat some of the fastest posted times.

This new technology though was creating a philosophical dilemma for me; I’ve always felt that riding (as opposed to training for races) should be fun and stress free. I am not racing anymore so trying to post fast times is counter productive to the type of riding I was now doing. When I trained for races, I never worried about times, just training intensity. How would I reconcile this philosophical difference? I struggled with this, but decided to see how it all played out.

I have found that the biggest challenge for me is to keep my ego in check while out doing my solo rides. Strava data uploaded can be made private or public. I made mine public because I want my friends to be able to see my rides. It is very difficult ego-wise to upload rides that are not impressive (speed, distance, average speed etc.).  I wonder sometimes if this is just an exercise in vanity. I find my ride frequency and speeds have increased, I have targeted section Leaderboards that fit my skill set. I don’t like the fact that before Strava, my ride ended when I parked my bike at home.  Now, the ride is not over until I upload my ride to the Strava site… I should be doing better things with my time than uploading ride data! I don’t want the appeal of Strava to disconnect me from what my rides should be about; the quality of the ride not the quality and quantity of the efforts.

I achieved a few KOM’s (King of the Mountain; the top guy aka fastest time for a segment). It is pretty satisfying to know you are the fastest for a particular segment but I keep it in perspective, it is not like winning a race. For me it is a way to document how fast I was/am at a particular time in my cycling life.  When I started riding, guys who were considered fast, would tell you their times and those times were either validated by witnesses (using stop/start time function on Cyclocomputers) or you just trusted that the guy was honest.  There is no hiding now; with GPS enabled devices your times are posted. I think they are pretty accurate, but there is some grumbling amongst the users that some times are either done on Mopeds, behind cars, or even data manipulated.  I don’t get the desire to cheat to achieve a virtual 1st place, kinda pathetic if you think about it. 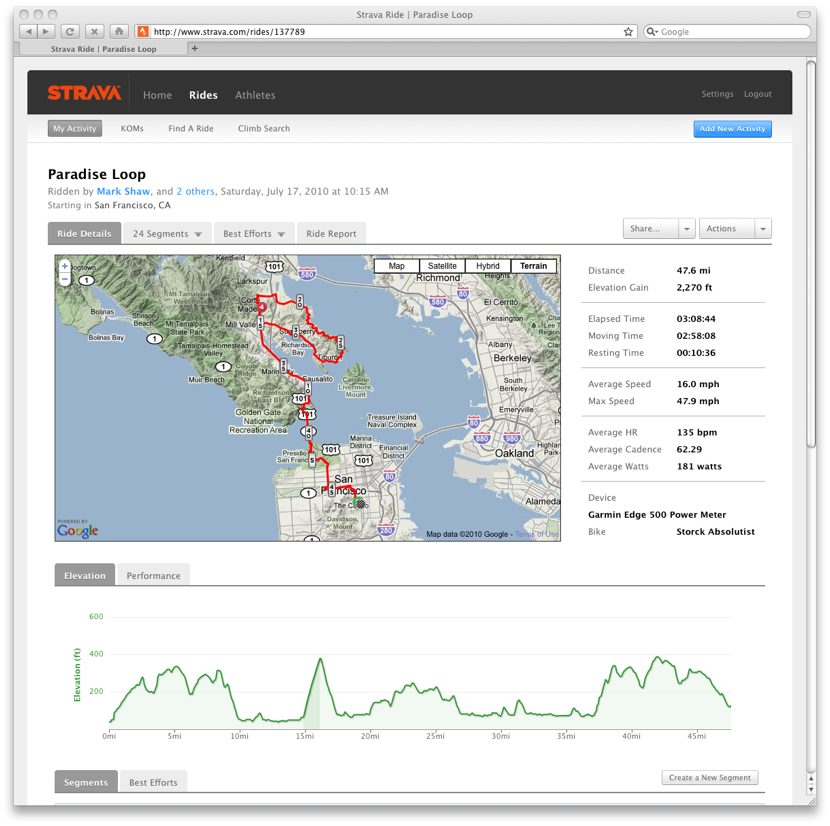 My friends would always ask me, “how fast can you do (inset climb name) climb?”. I never cared how fast I could do a particular climb, if I couldn’t keep up with the front group, what difference did it make? I’ve always been the type of rider who needed someone in front of me to really motivate me to go faster than my competitive limitations. At times, Strava provides that motivation to go harder than I normally would. I want to be up there with the fastest times, partly out of knowing I am capable of doing so, and partly out of desire to be recognized as a fast rider. For sake of posterity I guess, I just want to make my mark in the local cycling community. I hope I am remembered for being nice and generous guy, a good teammate and friend…being remembered for being fast is not so bad either :).

The problem with letting Strava dictate your riding experience is that it is a never-ending pursuit of time and “virtual” racing. If you are capable of setting a best time and find yourself at the top of the Leaderboard, your time most likely won’t last very long as there is always someone capable of knocking you off of the top spot. I now find that on some of my favorite rides, I am aware of what the fastest times are for a particular segment. I wish I never knew this information as it just takes away from enjoying the route for sake of just doing the route. My discipline to do my favorite routes at reasonable speeds and intensities is constantly being challenge because of this new information I have.  I don’t want to get wrapped up into segment times when the purpose of riding my bike is to enjoy the scenery, the adrenaline rush of being a human powered vehicle, change my course mid-ride or if I run into a friend on the road, I can ride with them instead chasing some segment time.

It’s been a few months since I began using Strava; I do enjoy using it and have been able to find a good balance between challenging myself and just riding along with out worrying about Leaderboards and segment times. I find I enjoy seeing the rides my friends are doing and encouraging them to keep riding and doing well.  When I raced, I only did a few time trials because I found them boring. I couldn’t understand how someone could get satisfaction out of winning an ITT because to me, winning a mass-start event is the ultimate race win experience. Strava for me is the closest I’ll want to participate in a real ITT.

I can see how some people who have never raced find the Strava “competition” fun, they don’t have to worry about learning to ride in a group yet get the satisfaction of “racing” in the virtual group of Strava users. There are a lot of fast Strava riders who never do any group rides, they are missing out on the fun social aspect of group riding, meeting new people, being one with the group, and learning new cycling skills.

It is also interesting to see some of the local group ride regulars’ Strava times, you realize some of the fast guys are only fast when they have the benefit of group drafting. I think that if someone is placed in the top 10 on a Leaderboard and a few seconds from the fastest time, it probably means that they were going hard and trying to set a fast time.

I’ll continue to use Strava, but do not and will not get caught up in chasing Leaderboards. Strava can be a great training tool to use; it provides really good ride intensity data analysis, year-to-date mileage, and a way to see how you stack up against your friends. You just have to try Strava for awhile and then determine if it will add or detract from your riding experience.

Being atop the Strava Leaderboard is an accomplishment, but really it is a personal accomplishment.  If you are not concerned with Leaderboards, then you probably will be much happier with your results because you have already come to the conclusion that you just want to improve on your personal times.

When you really win a real race (a mass-start race), it is a beautiful thing. You have to be fit, tactically savvy, and have nerves of steel. You get the elation of crossing the line first, the crowd cheering, the pats on the back from friends and spectators alike…real-time Kudos. You’ll never forget that feeling, that win will be etched in your memory forever. Being atop the Strava Leaderboard will never give you that special feeling because the race is never over, the winner is yet to be determined, there are only place holders…nothing beautiful about that. 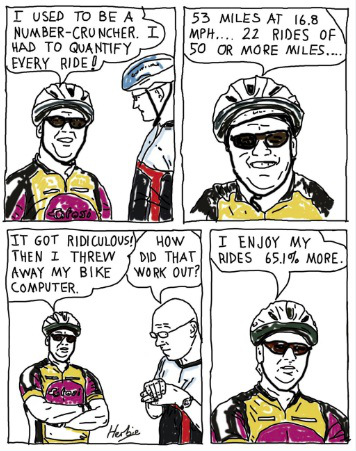