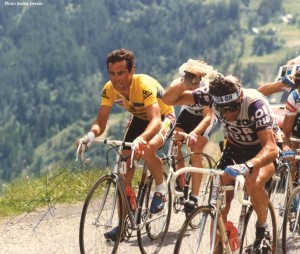 Throughout the couple of years that we created the Yellow Jersey competition during our rides, none of us raced. We didn’t want to race, we just wanted to hang out and have fun riding on weekends. Little did we know that the competition that we were engaged in would actually be laying the foundation for our future racing abilities and attitudes. Being a good evaluator of physical talent, I knew that we all could do very well in the sport. I mean the guys in our group were athletic;  they played football, baseball, basketball, track, and boxed.  Even though our rides were very hard and trying to attain the jersey was definitely a challenge, there was no shortage of tenacity and considerable tolerance for pain amongst us. My one friend; The Unlikely Wearer of Yellow, he possessed all of those attributes except that he relied on natural ability more than on hard training.

I think we all underestimated him because he never wore Yellow, he was close a few times but never in Yellow. Then on one particular Saturday’s “race”, he surprised us all….well kinda…I’ll never forget that day, it kinda summed up what the ride and the quest to wear Yellow had come to mean to all of us. 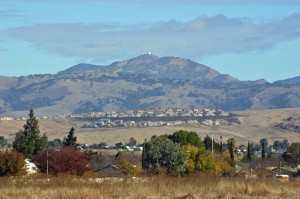 We met for that Saturday’s ride at my friend’s house in South San Jose. We determined before hand that the ride was going up Mt. Hamilton. Mount Hamilton is a mountain in California’s Diablo Range, in Santa Clara County, California. Mount Hamilton, at 4,196 feet (1,279 m) is the tallest mountain overlooking Silicon Valley, and is the site of Lick Observatory, the first permanently occupied mountain-top observatory. It has 3 sections; the first two are short climbs followed by short descents, with the last climb up to the Observatory being the longest and toughest.

The previous weeks Yellow Jersey wearer and defending champion was a good climber, he was pretty cocky and confident about the ascent up Hamilton. Amongst our group, I was probably the closest to him in climbing ability so I figured on that day I would just stay close to him and maybe get some time on him and the group as we got near the top. As we rolled toward the climb, we all felt the tension, this was going to be a long, hard day. We hit the first section and the pace went up, we all stayed together until about the last part of the fist level where separations began to to appear between riders. 3 of us rode in together to the first time check spot, with my underachieving friend losing 20 seconds. 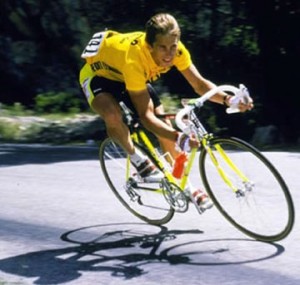 We descended into the first valley where the slower rider lost another 10 seconds. He was now down 30 seconds. The previous jersey wearer was still in Yellow and myself and the other guy were at the same time as him. The next climb resulted in my slower friend actually hanging with us but the other guy lost 10 seconds. So now we had the current jersey wearer still in Yellow, followed by me (same time), one rider at 10 seconds back and my slower friend at 30 seconds. I don’t know why this happened but as we ascended the last and longest climb up to the Obsevatory, an unspoken “truce” was in effect. I think maybe because those who were close on time maybe didn’t feel confident they could drop the others without potentially losing time themselves. We were definitely not worried about our slower friend dropping us. So we all kinda just rode up the the rest of the way together until about 1mi. from the top…..

My slower friend, 30seconds back on the group, kinda rolled away casually…I know how he rides, he was trying to look relaxed like he was just cruising but you could see the tension in his legs as he pushed a big gear. He would then casually look back as he went around corners. The current jersey wearer and I were laughing at him knowing that he was trying to be slick. For some reason we didn’t go after him…I guess the jets had been cooled off for too long. 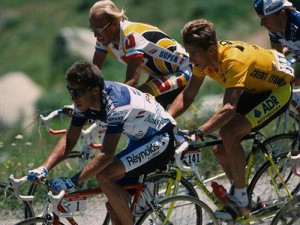 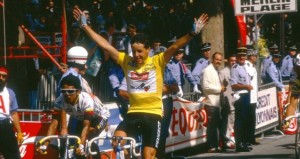 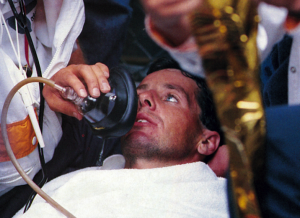 We get to the top and my slower friend is sitting down eating a banana (half eaten) and breathing heavily. Of course, we asked him how long he had been there and he said “2 minutes!” We were like “hell no, b.s, you are still breathing heavy and have only eaten 1/2 of that banana!” At that point he conceded 20 seconds back to us but we knew that was b.s too. So he tried to get other riders that happen to be there to “cosign” for him, they didn’t want any part of our debate so he had to concede back another 10 seconds to us.

So end the end, he started the climb 30 seconds back and now had a 1 minute cushion and was in Yellow for the first time.  My friend who lost the jersey told me in confidence (because he knew I could descend with him) that he is going to take time out of the “new leader” on the way down. The new leader came to me in confidence and asked me to help him…lol.. Oh, I thought, “this is gonna be good”.

We descended down from the top to the first time check point….BOOM! The new leader loses 15 seconds….He is informed of his time losses, he’s in panic mode now… We climb up the second ascent and descend down into the first valley and get to the Rangers Station, second time check spot and…BOOM! 15 more seconds gone. It is funny watching the previous jersey wearer talk trash to the current leader and tell him…”nice try but you are not keeping that jersey bub”… I was one of the strongest guys that day but I guess since I had worn the jersey for so many consecutive days, I really didn’t want to try and contest it that day, I just followed the other stronger guy and just marveled at the spectacle. 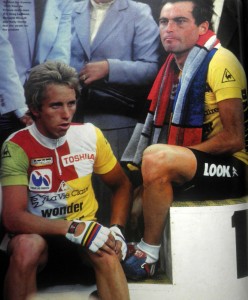 We ascend from the Rangers Station; it is a straight no stop point A to B to section (until the next time check spot). The current leader is doing all he can to hang with us on the climb, he is KILLING HIMSELF to do it, we can’t shake him. On the descent he gets gapped, we get to the designated stop and…BOOM! 15 more seconds gone! He has now lost 45 seconds since we descended form the top, he has a tenuous 15 second cushion with 5 mi. to go. We stop at a store, as I sit outside with the current “leader” he is pleading with me…”You GOTTA HELP ME!” lol…I just laughed and said “look, you know how it is, you are on your own”. He pleads with me more. The former jersey wearer comes out of the store and sees us talking, he is suspicious we are creating an alliance. He tells me..”you know he can’t hang with us, don’t help him”…oh the drama! 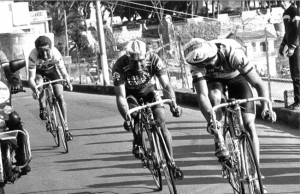 We roll out from the store and immediately the former jersey holder attacks, I just sit behind the new leader as he valiantly tries to catch him. It is apparent that he will not catch him on his own so he turns to me and asks for help. I tell him I’ll give him one pull, I look up and the former jersey wearer is looking back so I can’t pull then. I had to wait until he turned around then I gave a hard pull and brought the Yellow Jersey back. All hell broke loose. We were called cheaters! It was funny to me, I just said he chased me down…I didn’t know he was on my wheel 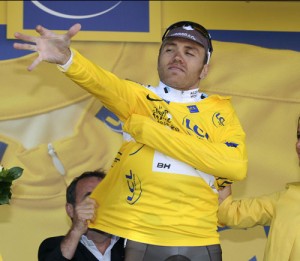 You could see the current leader grow in confidence, 3 miles to go and he was still in Yellow. He got a little too cocky. I told him, that was all the help I was giving him. Over the next few miles he had to answer repeated attacks in order to preserve his lead, and with the help of a few stop lights that halted the action, he did in fact retain the jersey!  We get back to my friend’s house and we are all laughing and debating the legitimacy of his Yellow Jersey. The new leader is going on and on bragging to his family that he was the best that day…a few riders offer a different version of events, the debate continues. At the end of the day, we gave him his rightful place amongst the Yellow Jersey wearers even though his victory was suspect at best. It’s still debated to this day.

I had more fun and satisfaction watching him scrape, beg, and borrow for that jersey than I did from the many times that I had it. The look on his face, the joy of finally having bested us was priceless. Each of those guys became really good bike racers, I knew they would as they were good in every other sport I ever saw them compete in…even Ping Pong!

What memories, I love those guys.